Excalibur #56: “Things That Go Shriek in the Night” 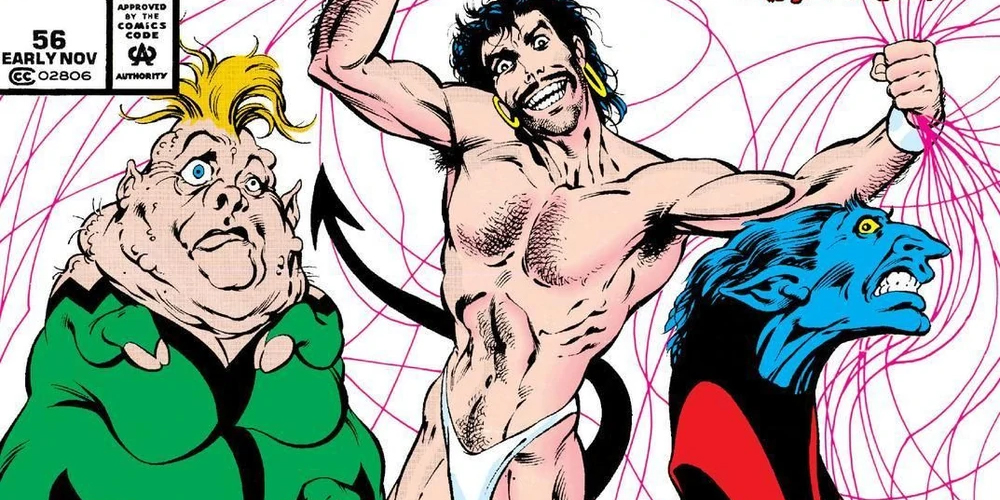 “Things That Go Shriek in the Night”

If you’re a superhero, you probably shouldn’t throw a party. And you especially shouldn’t throw a party where you invite the fascist dictator from an alternate dimension masquerading as the former girlfriend with whom you’ve been cheating on your current girlfriend, who’s teamed up with the reality-warping older brother who hates your guts. We reckon with the consequences of this state of affairs in Excalibur #56, “Things That Go Shriek in the Night,” talking gender, violence, and body horror with returning guest Dr. Samantha Langsdale. Plus: a moment from The Unstoppable Wasp that made Anna cry (in a good way). 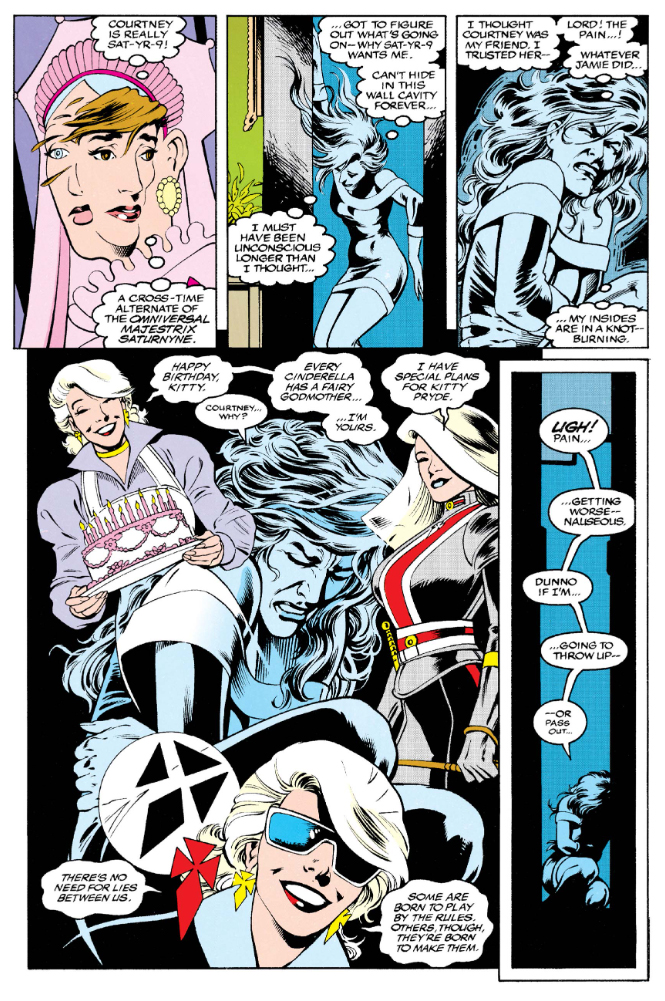 “Sat-Yr-9’s betrayal was a physical betrayal. So of course Kitty’s going to feel it physically. We also see the betrayal alongside the things that attracted Kitty to Courtney.” -Sam 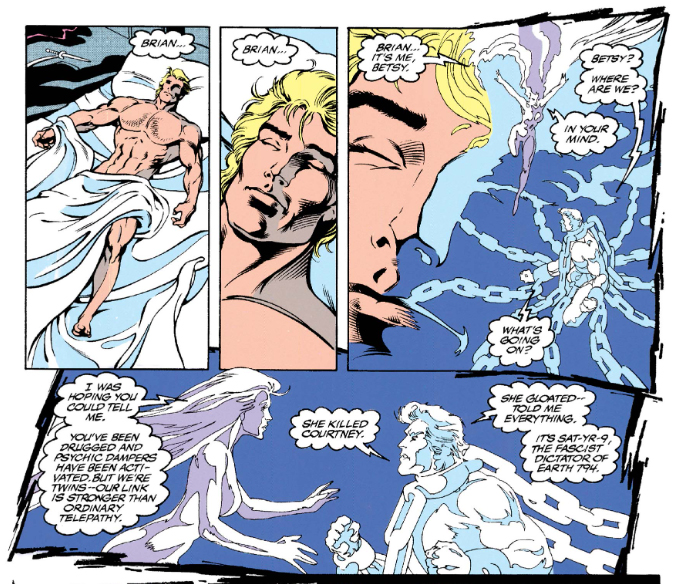 “Talking about rape can be uncomfortable and productive. This is hand wave-y in a way that doesn’t feel productive. It confirms Sat-Yr-9 is evil. Then we move on.” -Mav

“Brian is chained to the bedsheet on the astral plane, which is a very clear bit of visual symbolic surfacing of the theme of sexual violence.” -Andrew 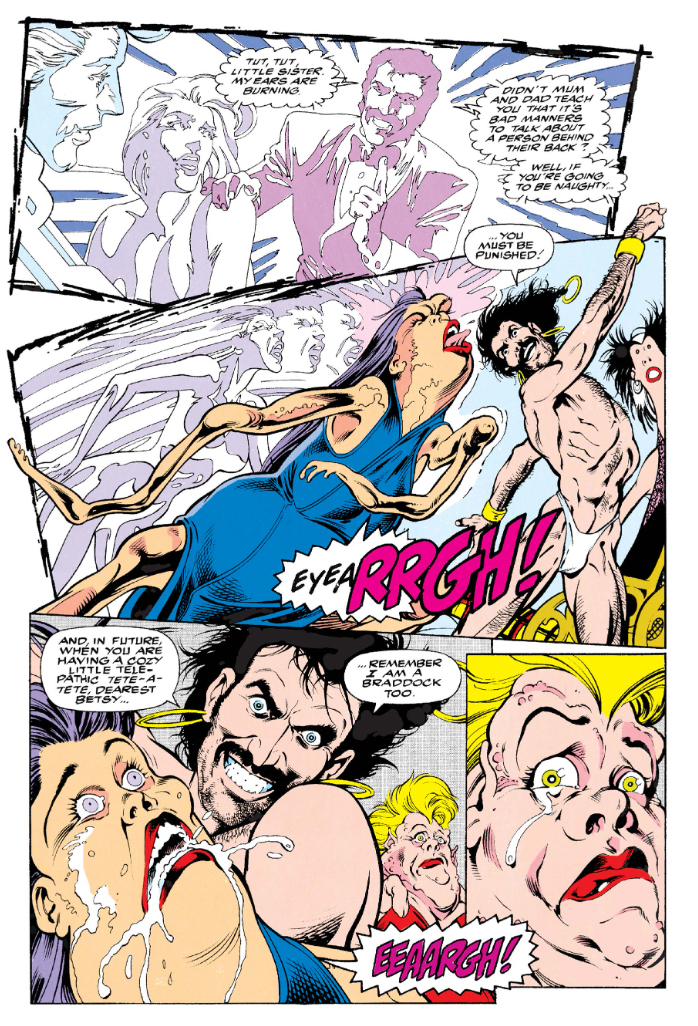 “I found myself questioning to what extent the transformations of Betsy and Meggan in particular interrogated cultural prejudices about things like gender and disability and to what extent they reinscribed them.” -Anna 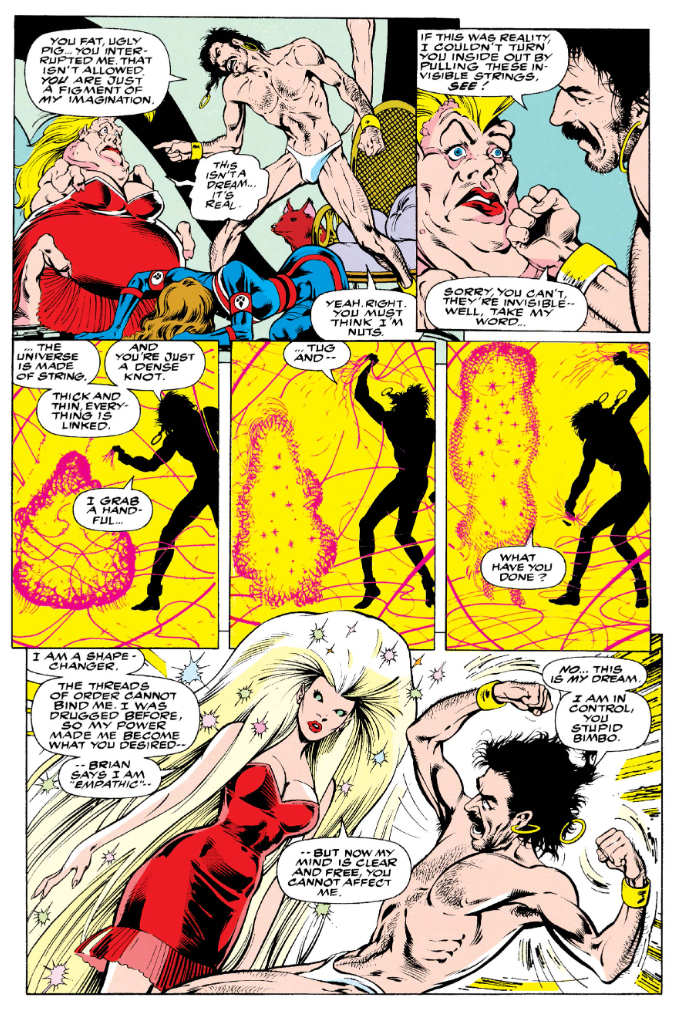 “Body horror invites conversations that deal with both terror and desire. We see that in play here, with Meggan eventually refusing to embody the monstrous shape that reflects Jamie’s desires.” -Sam 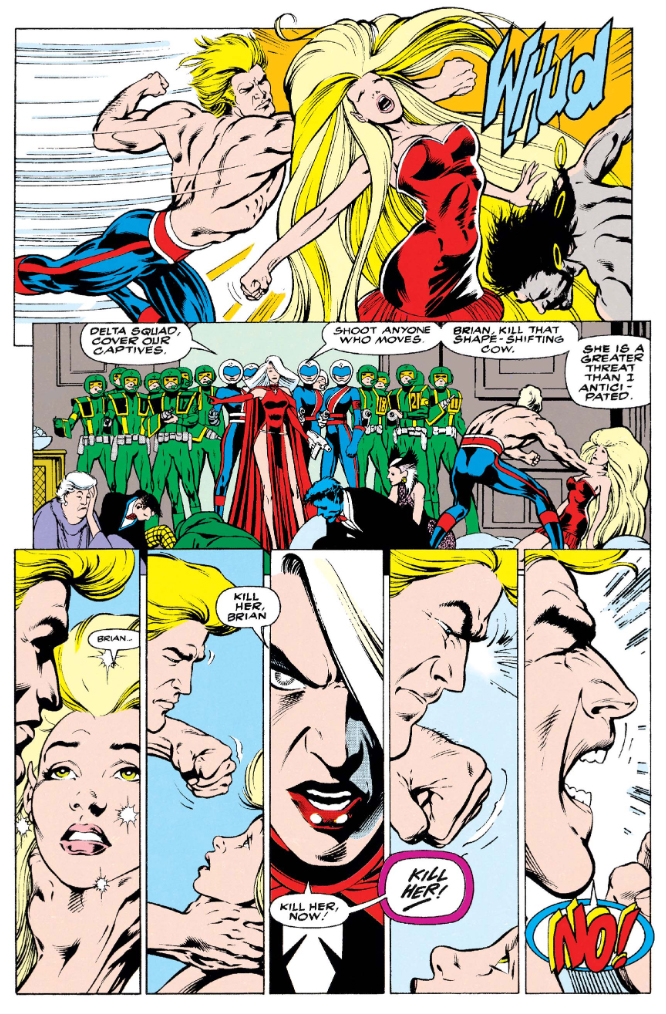 “I couldn’t stop thinking about how the fact Meggan has to save herself from Brian by becoming what he desires underlines the abusive aspects of their early relationship.” -Anna 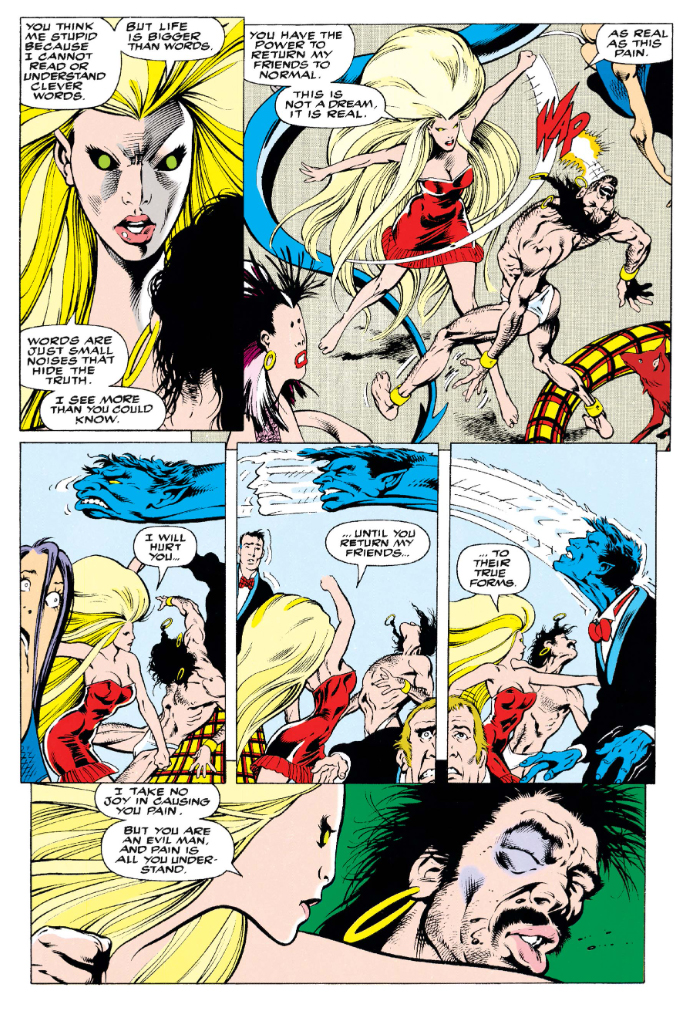 On women and violence:

“I think it’s unfair when we expect female superheroes not to use violence because what else are they supposed to do? Violence is the currency of this space. But we can make distinctions between types of violence.” -Sam

“Jamie attacking with a banana mixes the real with the absurd in a way that, if I’m being generous, mocks phallic power. But phallic power is also required to defeat Jamie.” -Sam 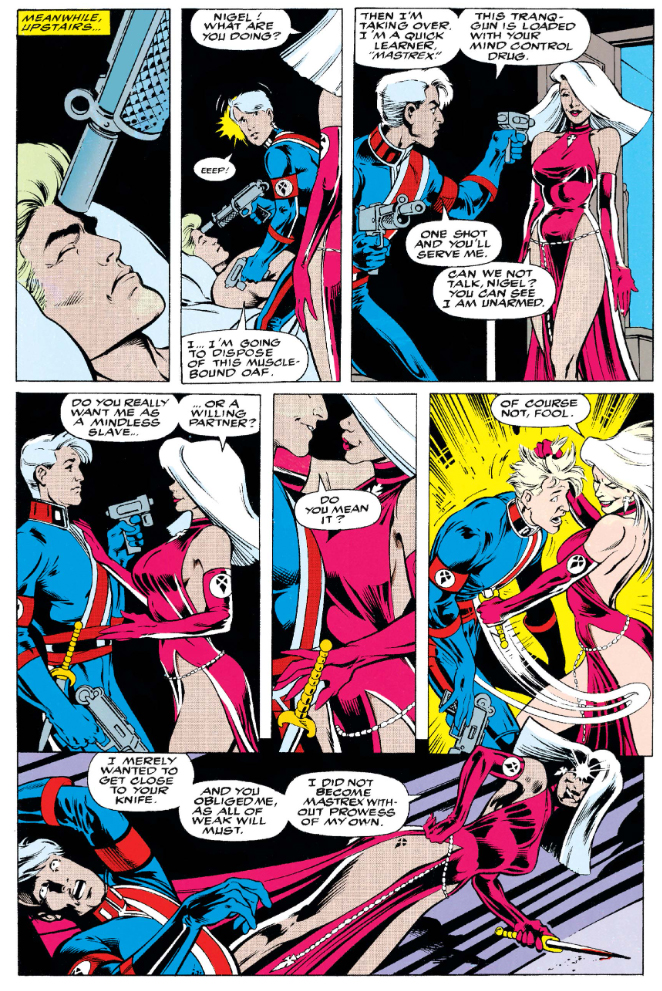 On the end of Nigel:

“In our early episodes, we talked about our mileage on Nigel Frobisher, and how some potentially interesting things would happen with him, but that it wouldn’t really go anywhere. This is it not going anywhere.” -Mav 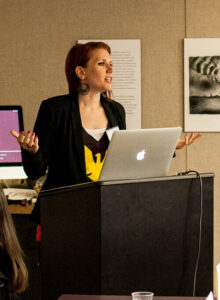 And! You can check out her academic anthology, Monstrous Women in Comics, co-edited with Elizabeth Rae Coody, wherever fine books are sold!

Plus! Check out these book chapters:

“Higher, Further, Faster Baby! The Feminist Evolution of Carol Danvers from Comics to Film,” in The Routledge Companion to Gender and Sexuality in Comic Book Studies.

“Over the Rainbow Bridge: Female/Queer Sexualities in Marvel’s Thor Film Trilogy,” in Supersex: Essays on Sexuality, Fantasy, and the Superhero. 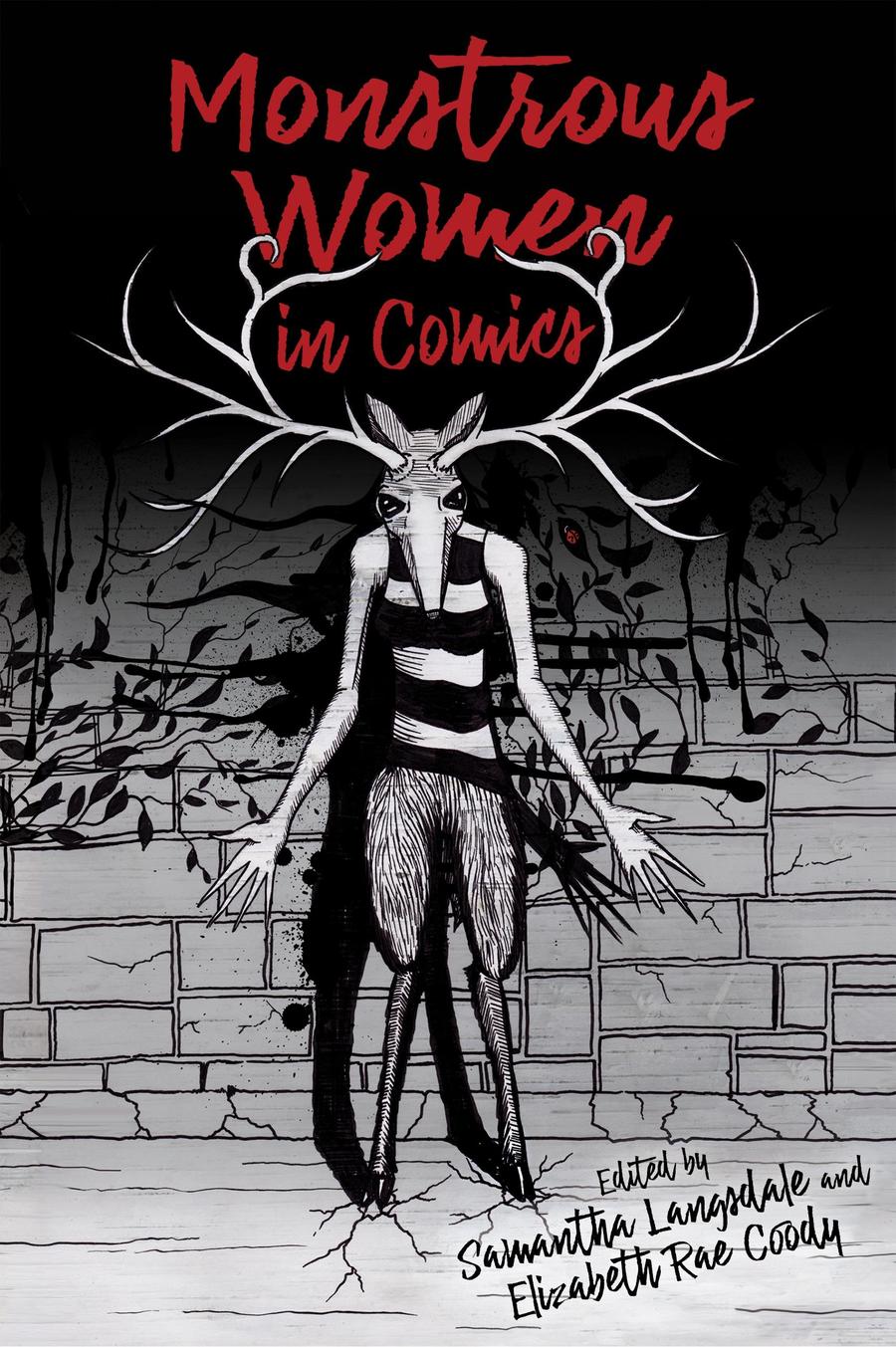 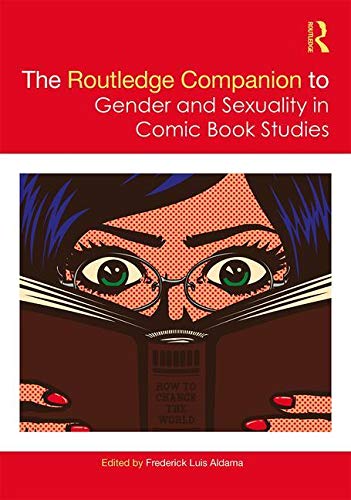