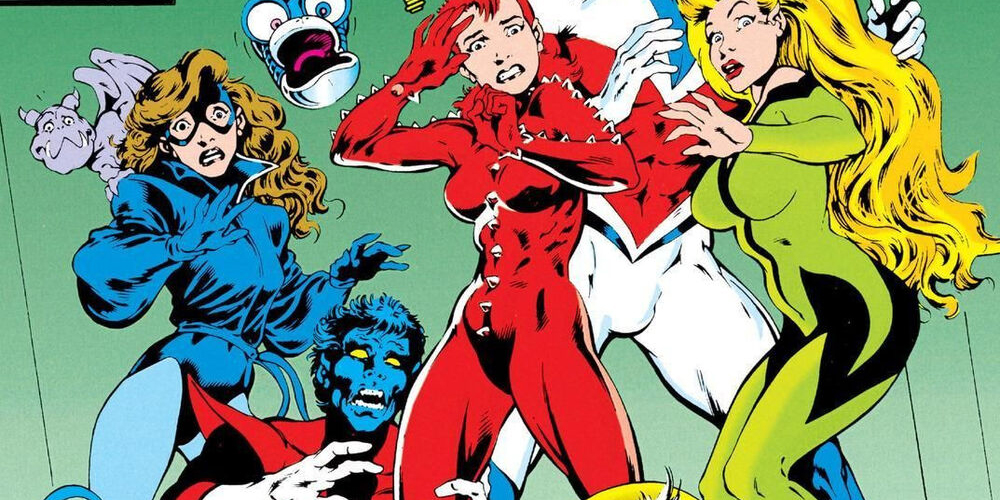 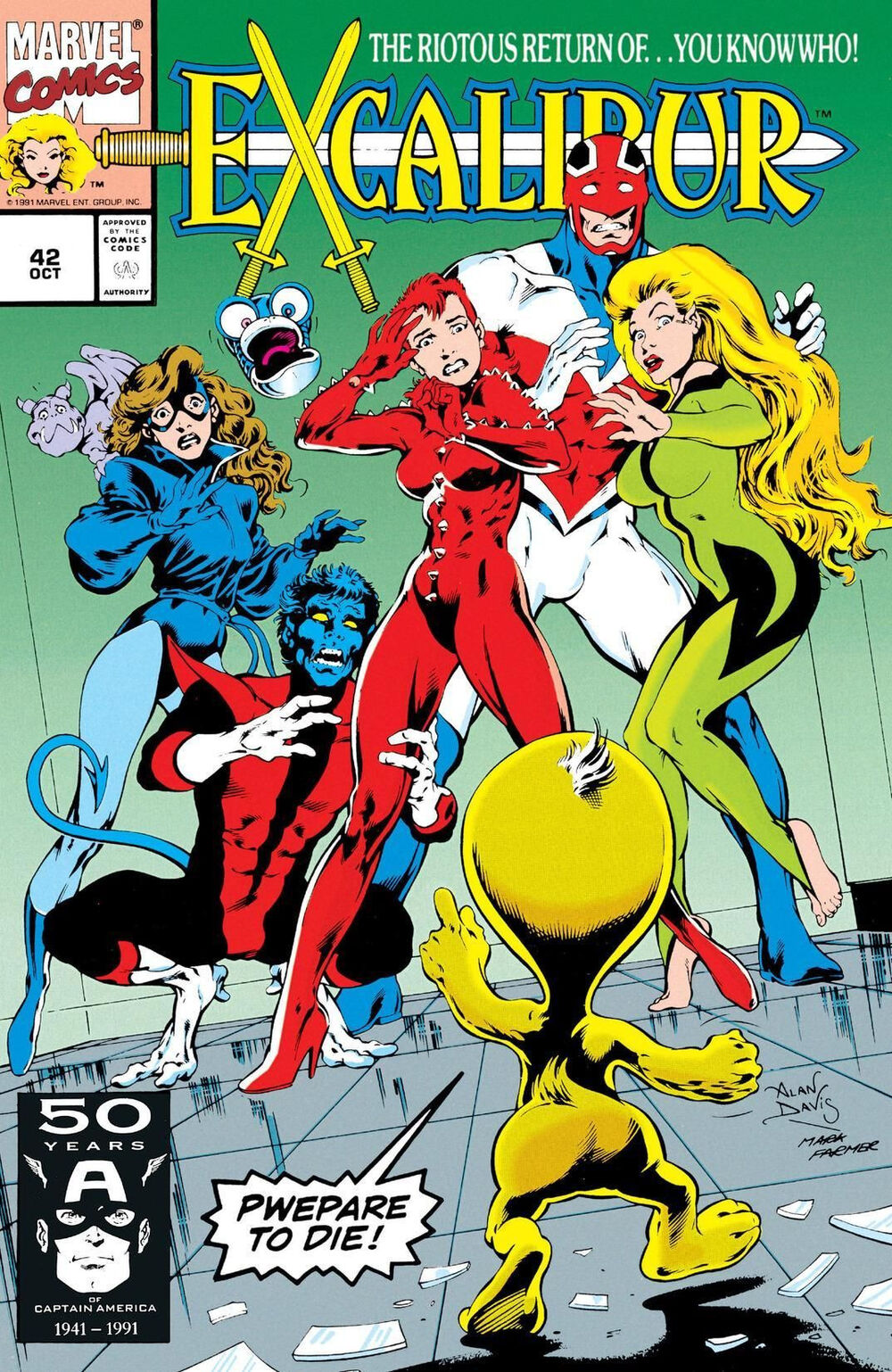 “A Hatch is Plotted”

New Year, new era of Excalibur, as Alan Davis makes his triumphant return to the title he co-created to write and draw one of our all-time favourite breakfast scenes! But there’s more than toast on the menu in Excalibur #42, “A Hatch is Plotted.” There’s also explosive eggs and explosive shakeups of the team’s status quo—within a much-appreciated return to form. Writer and music critic Quentin Harrison joins Anna, Mav, and Andrew to reminisce and gush about his first-ever issue of one of his most beloved comic book series, talking Davis’ deft rhythm and cadence and why Excalibur’s one of the funniest X-books—and one of the most human. 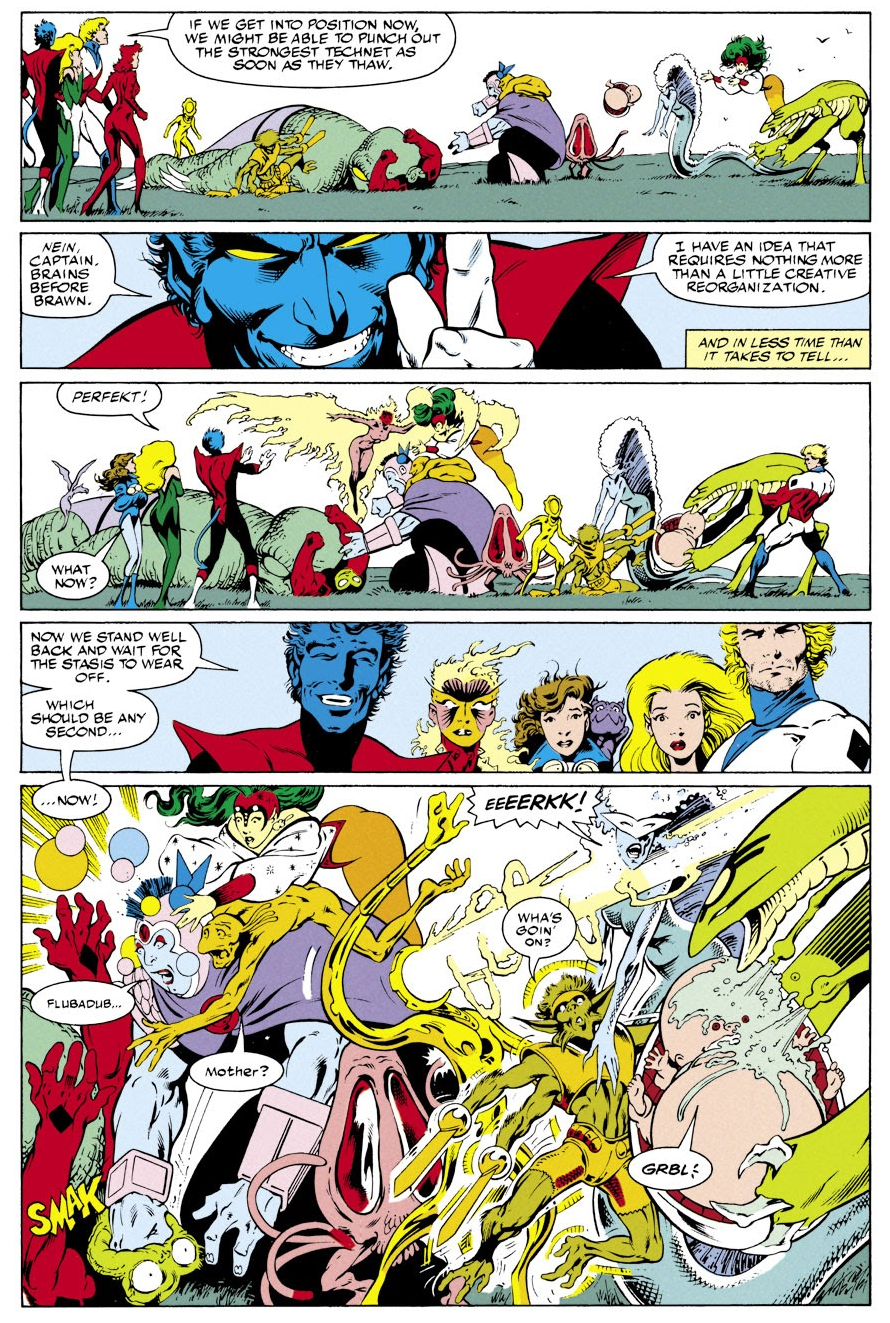 On what makes this funnybook special:

“This issue is great because it represents everything I love about Excalibur—which is a blend of action, humor, and humanity. And usually great art, and great dialogue. It doesn’t get better than this.” -Quentin

On Brian’s complexity: “The Braddock family, Brian, Betsy, and Jamie, all have their own neuroses and traumas, and they carry those things into their adult lives. In Excalibur, Brian sometimes means well, but his trauma turns him into a jerk.” -Quentin

On the genius of Alan Davis:

“Alan Davis has a very distinct style. It’s very fluid and very beautiful. And I think he knew how to capture the grandiosity of comic books while also being so skilled with cadence and pacing. The figures are very grand, but he’s also able to capture intimate, domestic moments.” -Quentin 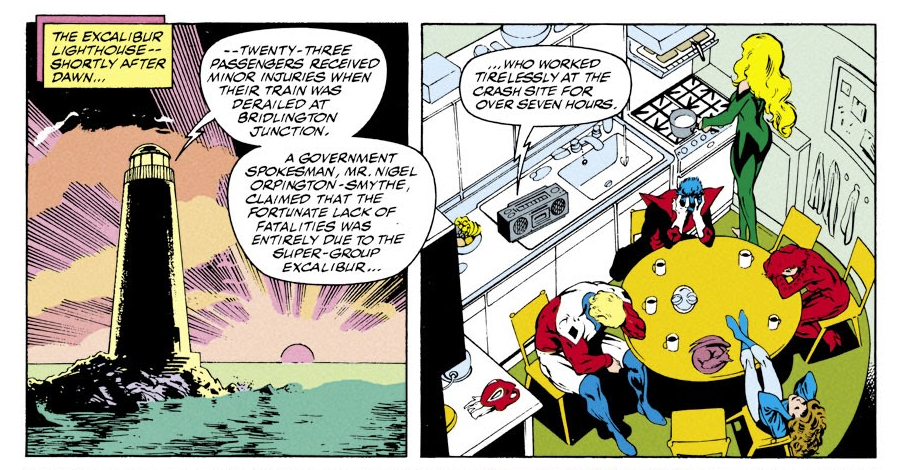 On kitchens and character:

“This feels so unlike the kitchen scene that opens Promethium Exchange. From the first panel of this comic, everyone’s in character. Everyone is sitting in their chair differently. They’re all being tired differently. That’s what’s so perfect about it.” -Anna 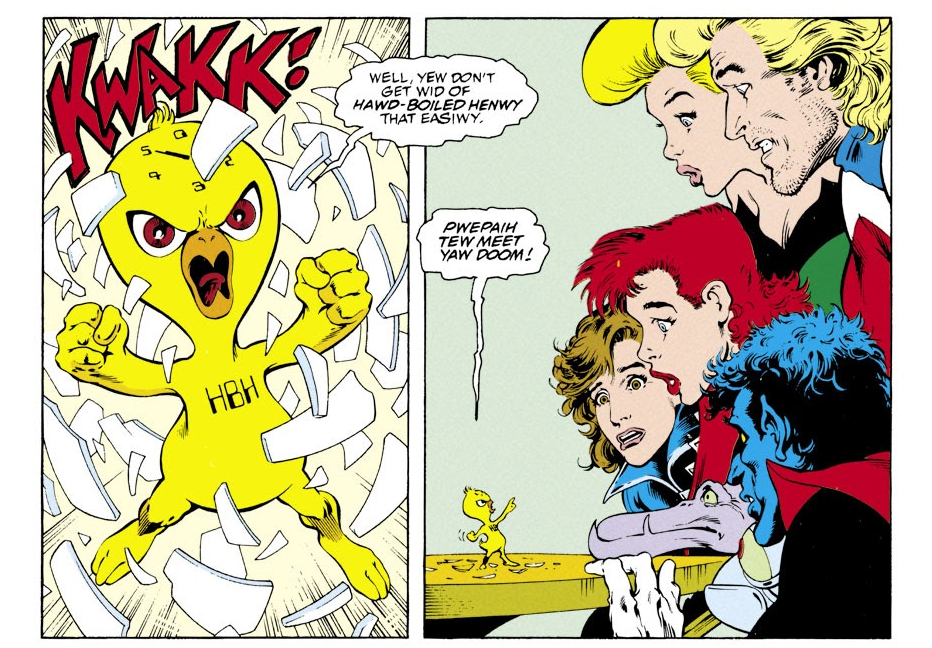 On a welcome return to form:

“When George Perez took over the Avengers, we got splash pages with 200 characters. When Todd McFarlane took over Spider-Man, everything had to be larger than life. When David comes back to Excalibur—they have breakfast and talk about eggs versus toast. It feels so refreshingly Excalibur.” -Mav 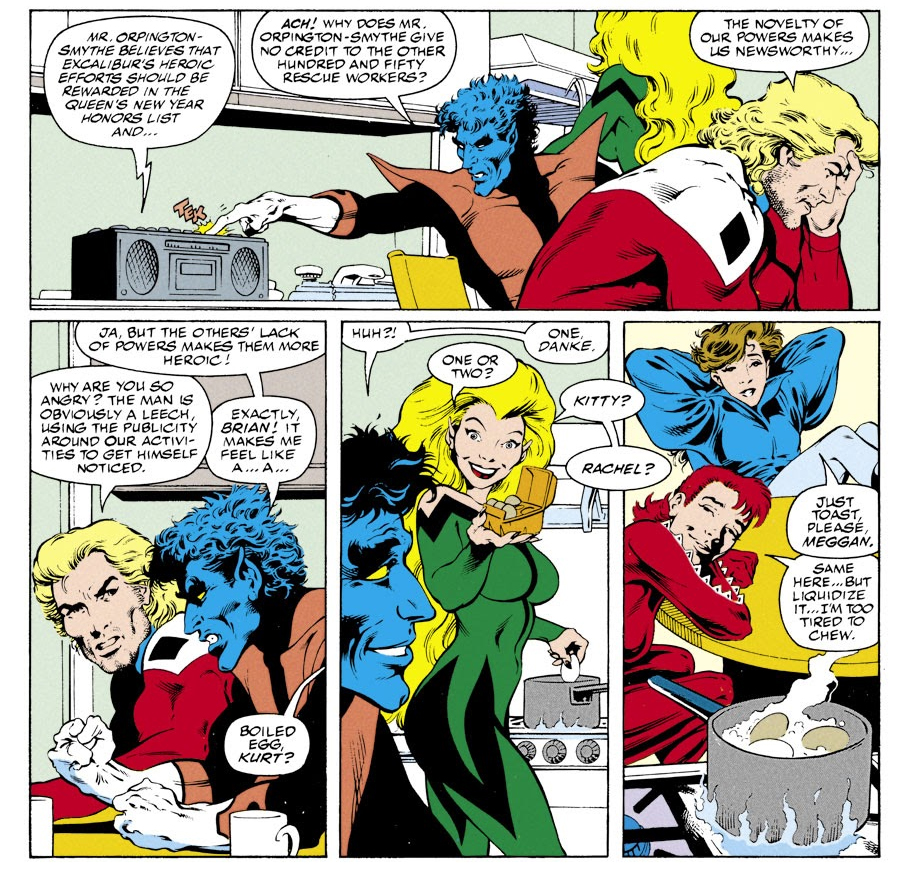 “Kurt gets so worked up about how ‘the rescue workers are the real heroes,’ and it’s so exactly him. He’s a character who believes in heroism. And it almost models fandom of the character, because if you invest in Kurt, you’re investing in aspirational heroism. He’s a very optimistic character.” -Anna 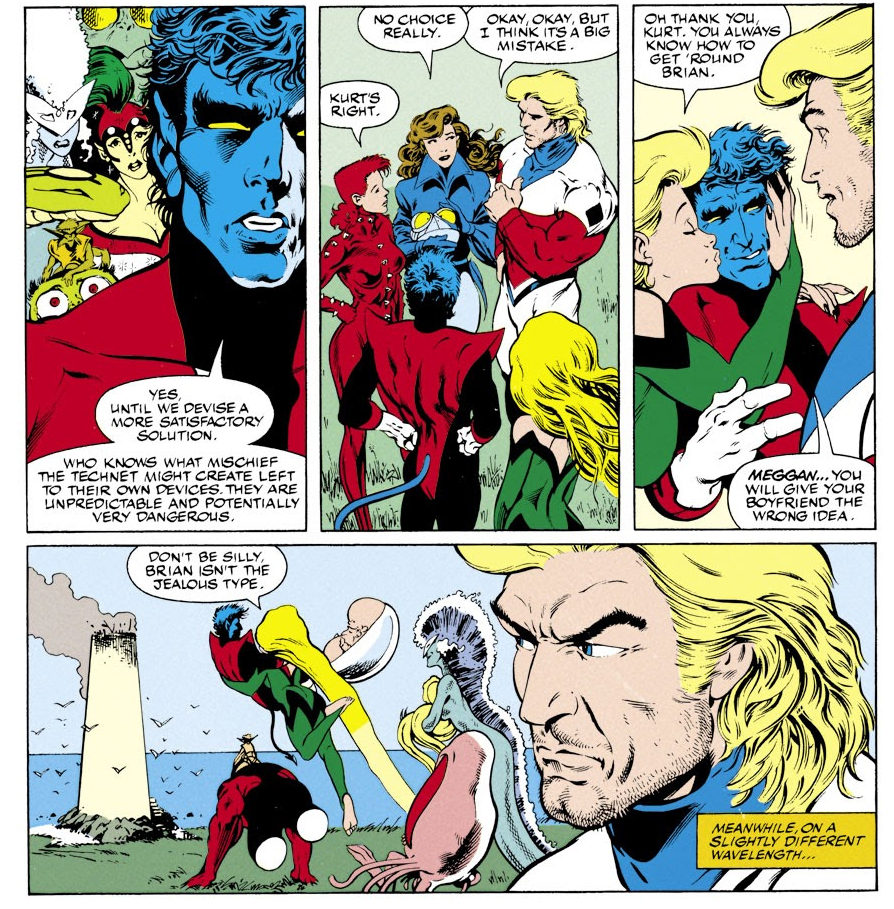 “When Brian makes the stink face watching Meggan fly away with Kurt in her arms, after being overruled by Kurt and the rest of the team—in my head canon, this is moment when Brian realizes he’s not the leader of Excalibur, and never was.” -Andrew 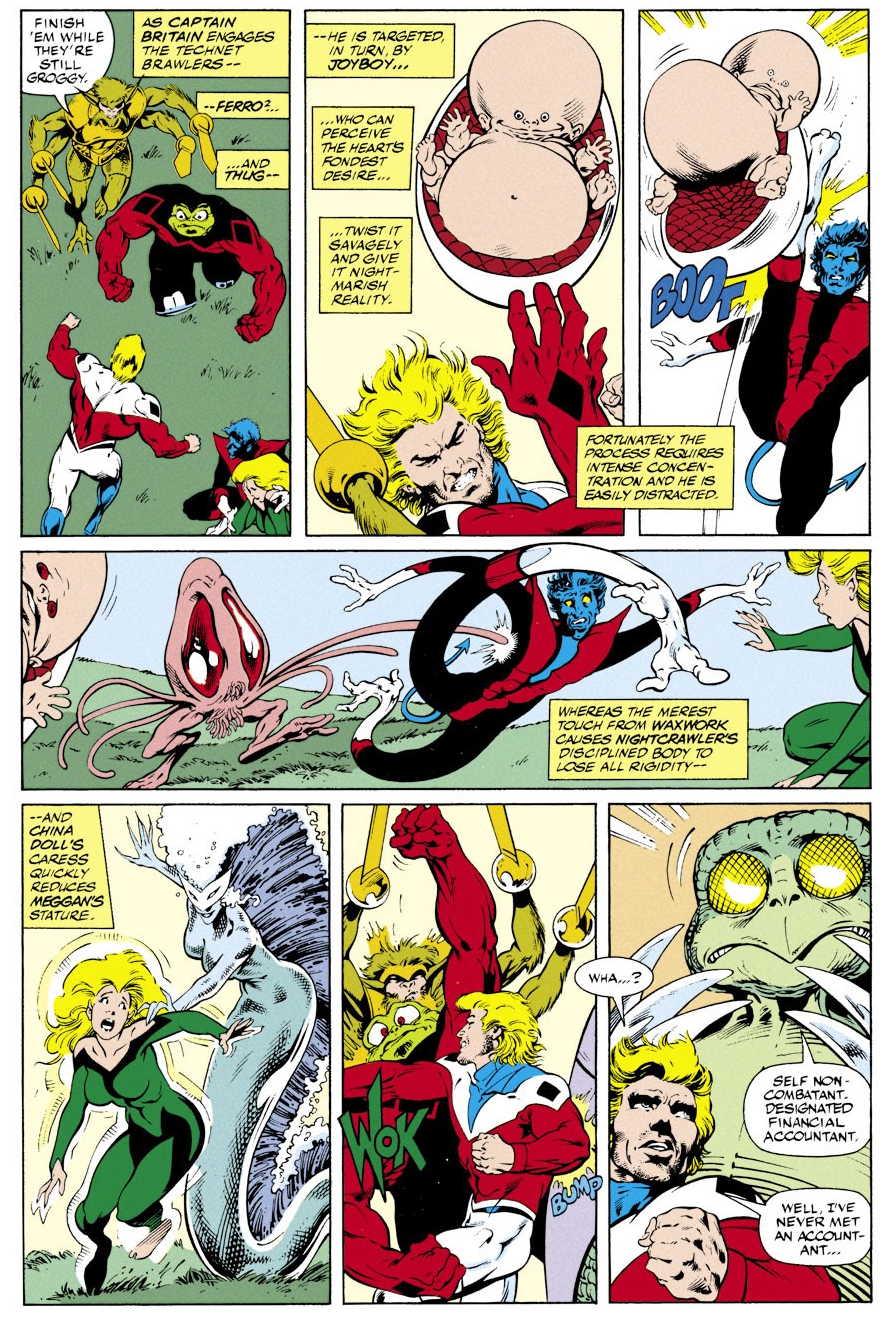 On symbolism of villains:

“The thing I like about Technet is how they threaten dignity specifically—the way their powers are based in transformations that are either gross or too intimate and illuminating. In a book with a lot of pratfalls, I think it’s useful to have a villain that capable of humiliating the heroes in such a literal way.” -Andrew 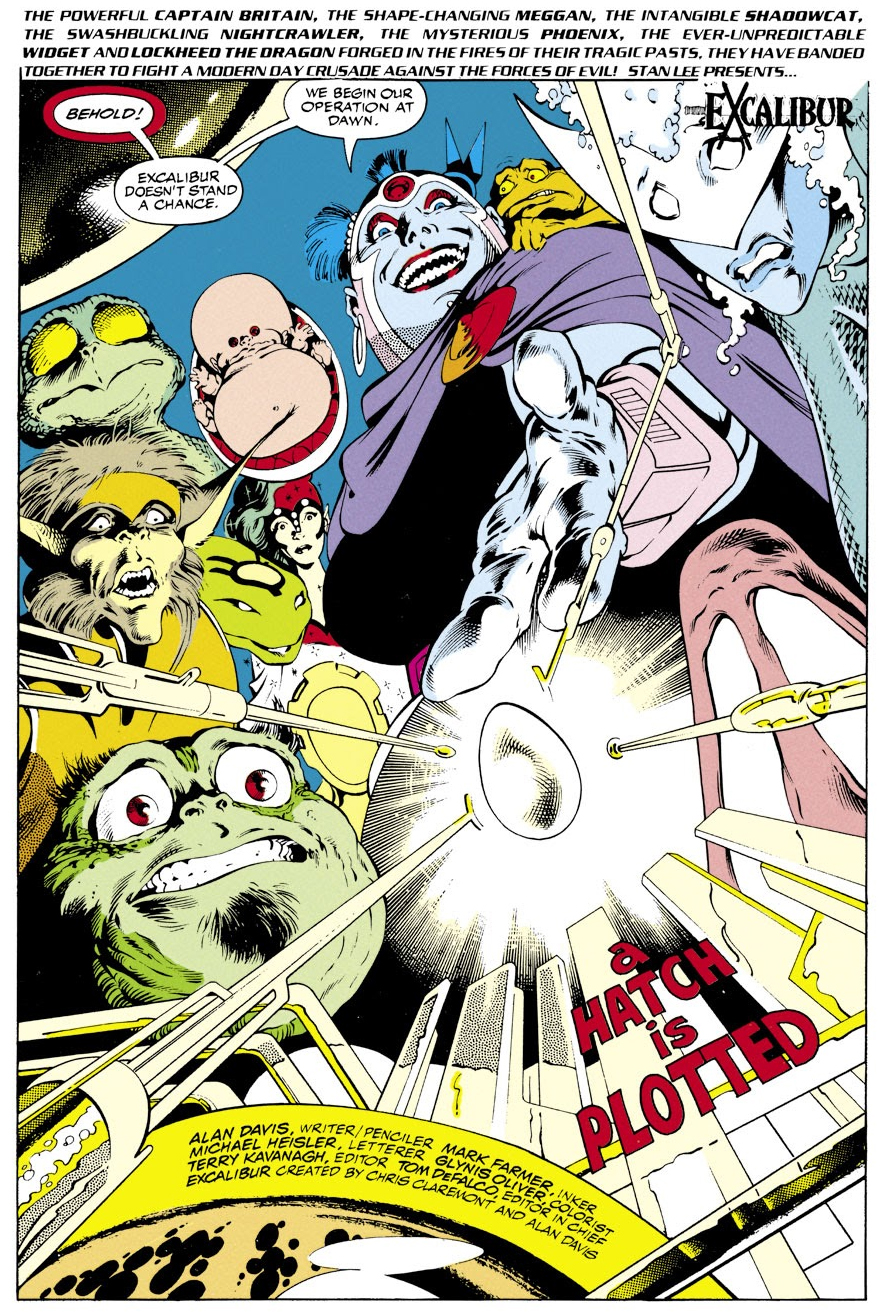 On Gatecrasher as protagonist:

“I really thought about my affection for Gatecrasher reading this issue. And I was surprised to realize how important it was to me to see her again. She’s a female character with an unconventional body in a space that’s not kind to that type of body. Other characters make comments about her body, but that’s not how she feels. She comes across very comfortable with her size and strength. She’s proud, spectacular, and glamorous.” -Anna

“I think the comedy in this issue benefits from Alan Davis being the writer and the penciler. Synchronizing words and pictures helps him nail the comedic timing.” -Andrew 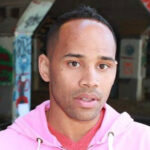 You can also find links to all the fabulous things he gets up to, including the Record Redux book series and his ongoing interviews, reviews, and essays for Albumism, via his website! 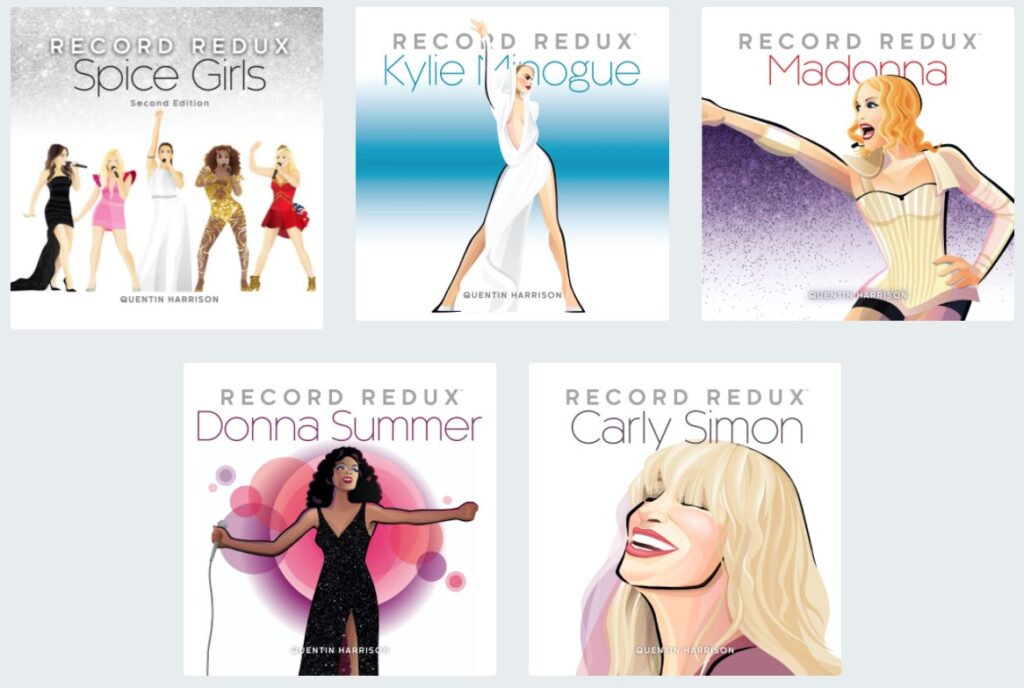