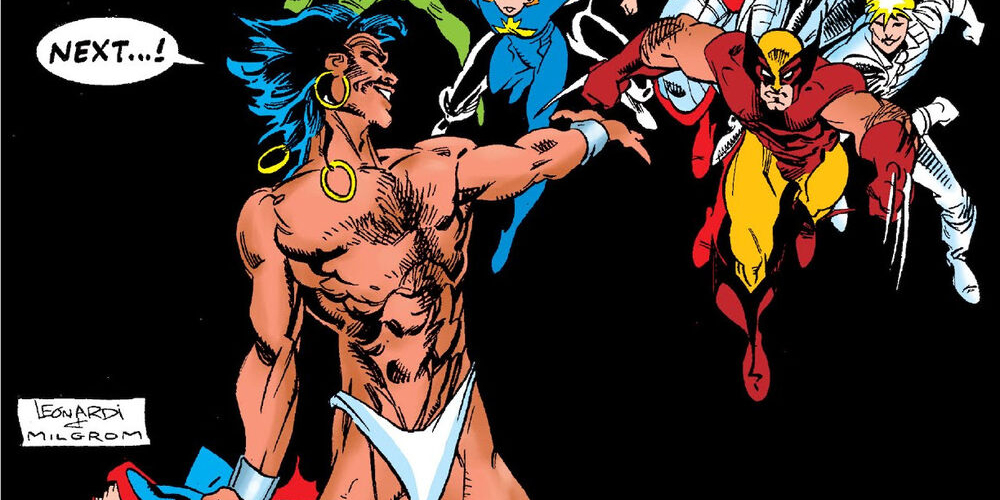 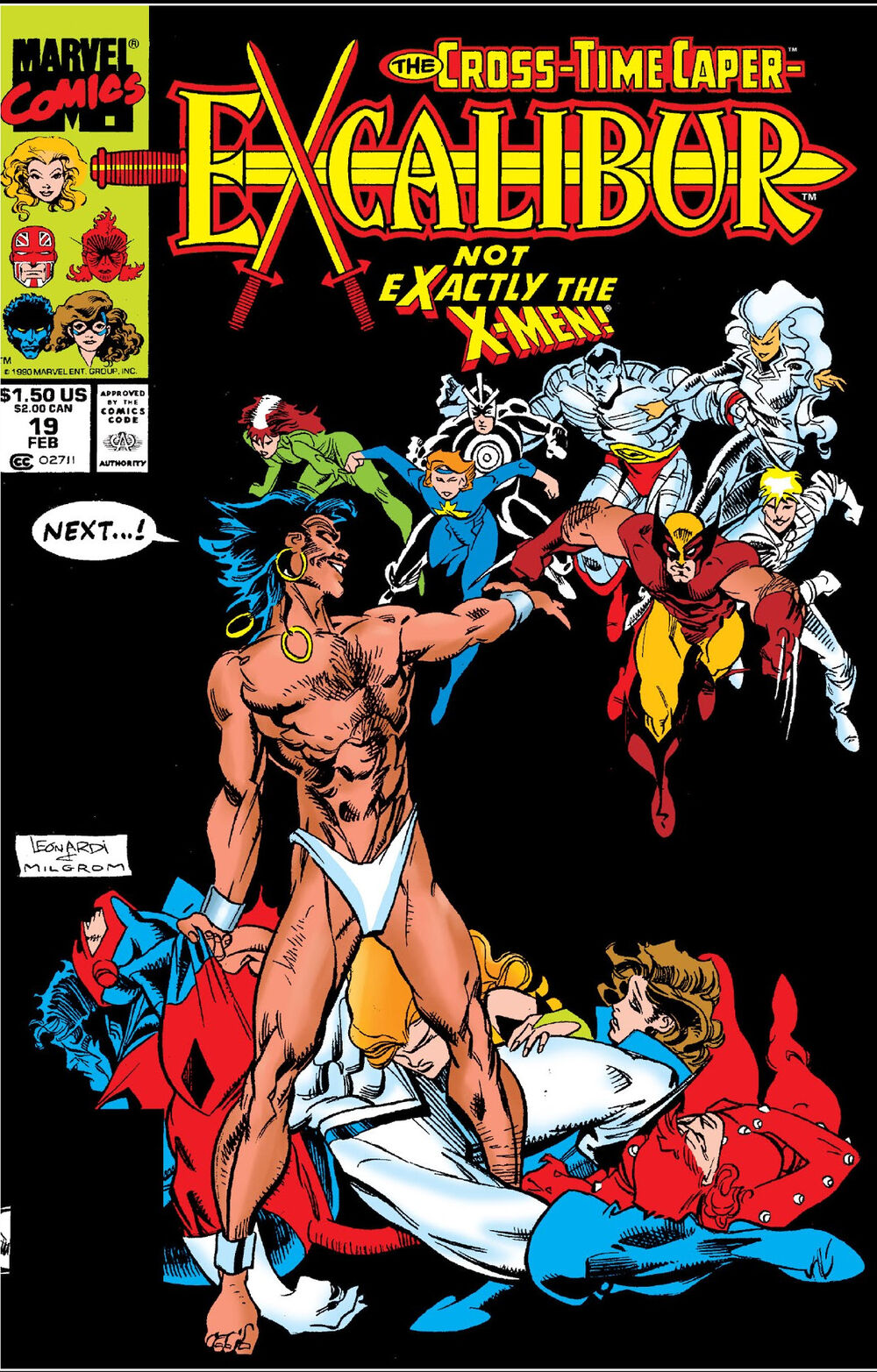 We’ve pulled the strings of reality to create another epic podcast team-up as Justin and Alicia of The X-Wife Podcast join Anna, Mav, and Andrew to talk Excalibur #19, “Madripoor Knights!” But the team-ups don’t end there! Chris Claremont teams up with celebrated penciler Rick Leonardi, Jamie Braddock teams up with Jamie Braddock, Kurt teams up with the Dirty Angels, Rachel teams up with Meggan, and no one teams up with the X-Men in a story about fraternal betrayal and finding new ways to win. Also, Kitty teams up with a pair of very tight jeans and everyone shuns Anna’s questionable takes on Hamilton and Kurt’s flirting. We only hope we’ve helped rather than hindered “one man’s elaborate scheme to get his wife into X-Men comics!” 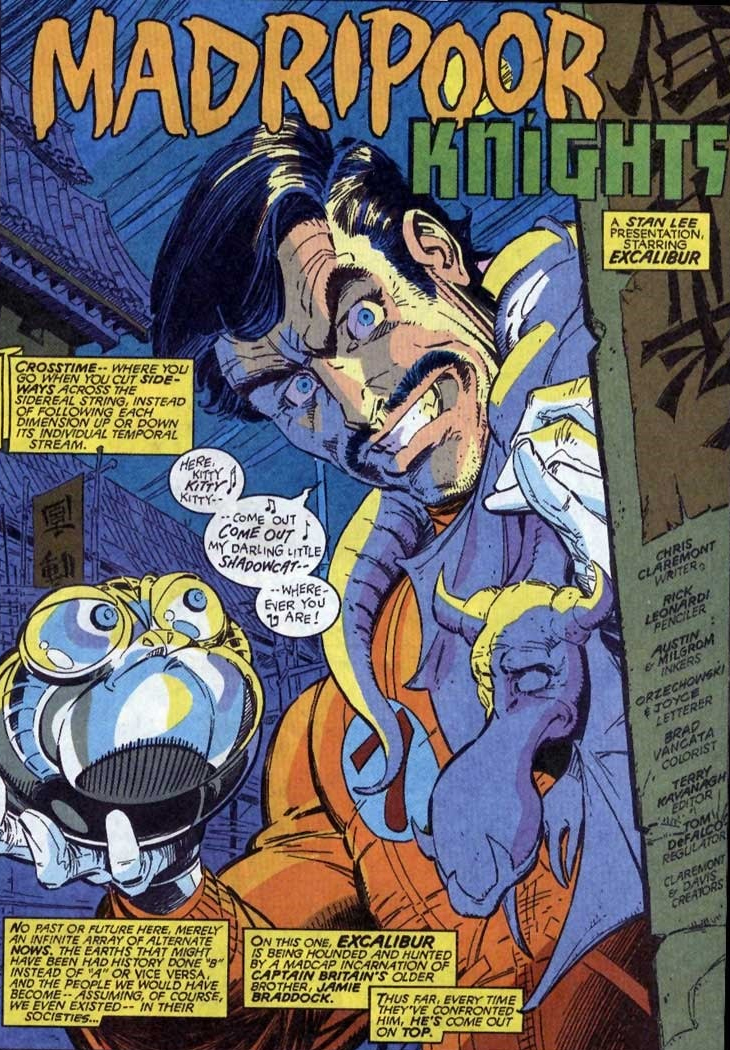 On a wonderful opening splash:

“This isn’t a Will Eisner splash page. It’s not dynamic in any way. This is just Jamie mean mugging. But Leonardi makes it look so good.” -Andrew 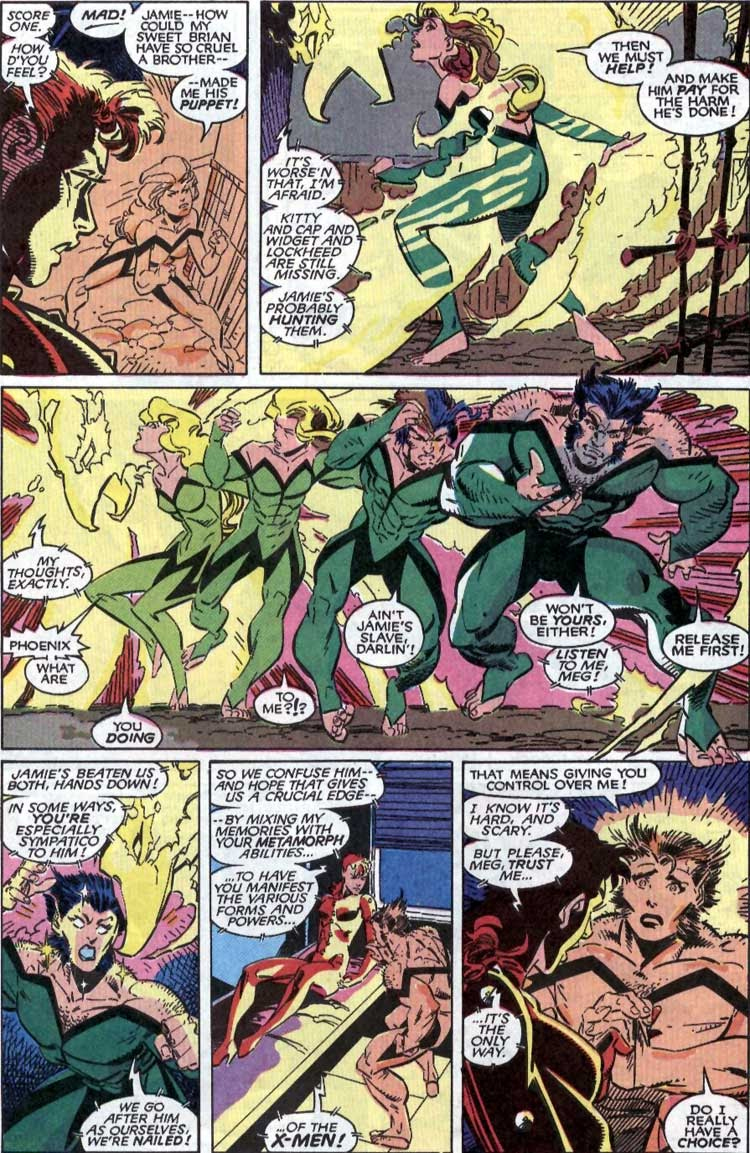 On puppets, powers, and possession:

“There were a lot of themes of power and possession in this issue. Jamie possesses Rachel who possesses Meggan to match power with Jamie.” -Justin

“Meggan doesn’t feel like she has an identity. I wanted her to have more authority over her decisions. It was like she was a puppet the entire time. I want to see her make a choice for herself. -Alicia 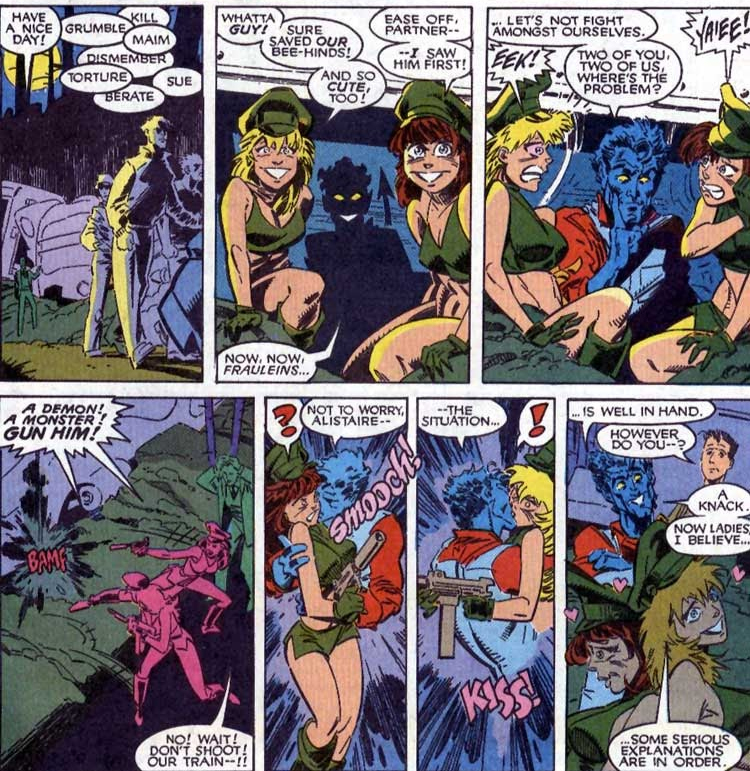 “The Dirty Angles are seeking sanctuary, so–extra creepy. Plus, Kurt doesn’t care which one pairs up with, as long as they have matching genitals. Which is not Nightcrawler to me.” -Andrew

“I’m not defending this scene. But I didn’t take it as seriously as I might have done because of the cartoony-ness of it. It’s a bad joke, involving assault at the expense of female characters. But at least it’s a joke…? (I guess?)” -Anna

“I was a bit shocked by this version of Nightcrawler, who’s sexually aggressive but in a creepy way that’s definitely not suave. Does Kurt have some sort of other power I don’t know about, where his kisses are magic?” -Alicia 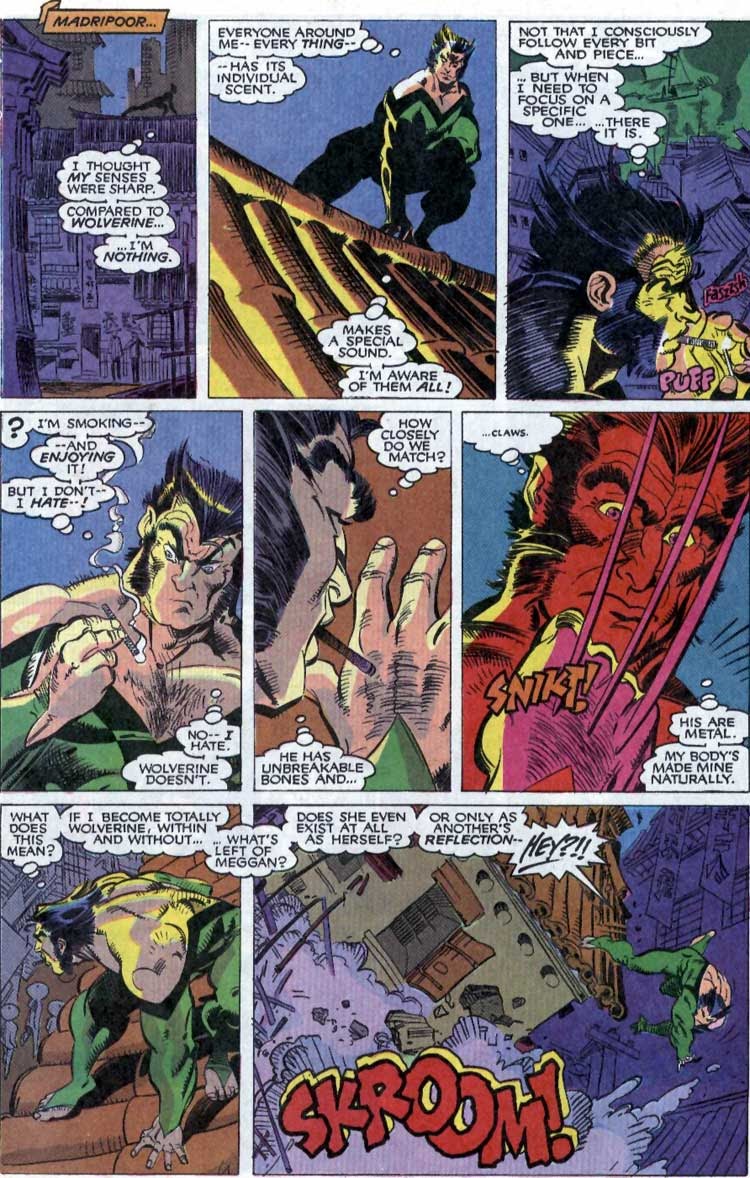 “Meggan, like all shapeshifters, creates opportunities to ask questions about power, gender, and identity. But there could be more depth. She’s more interested in the fact she likes cigars and has claws than the fact she presumably has a penis now.” -Mav 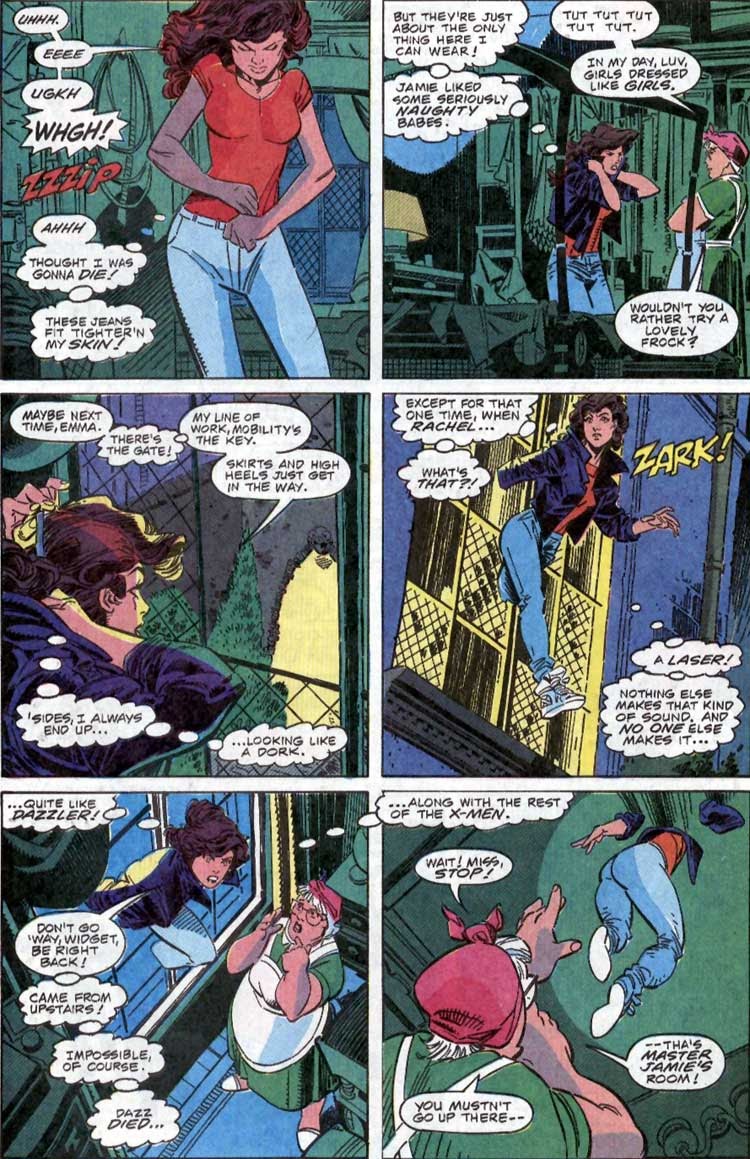 “I love Kitty taking the lead, being on her own and making her own decisions, which shows her maturity. She’s also very interested in investigating what’s going on. She’s thinking as well as reacting.” -Alicia 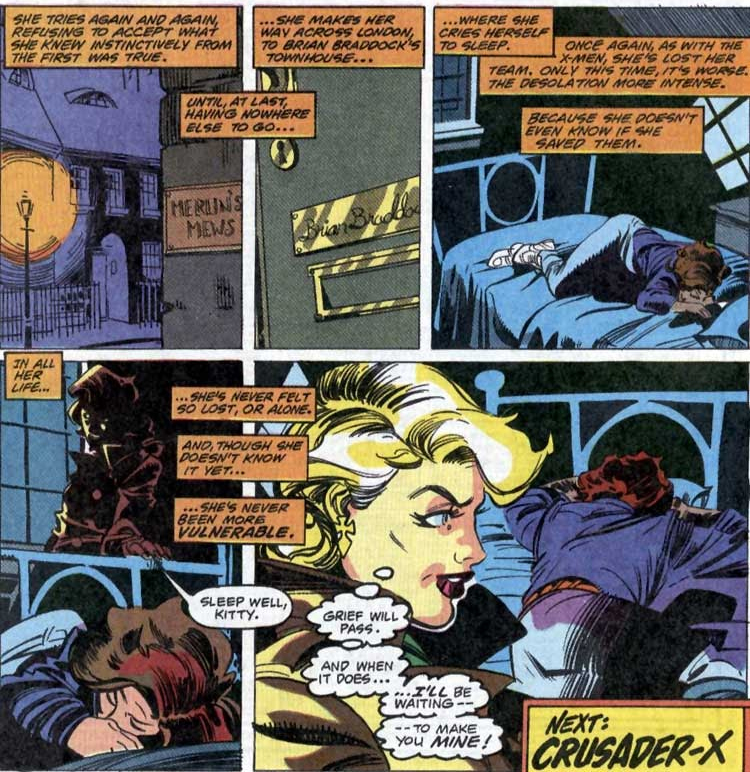 “Female action heroes sometimes struggle to communicate vulnerability without seeming ‘weak.’ But Kitty’s not falling apart from not being able to handle the thing. She handles the thing, then we see her complex emotional reaction to the thing.” -Anna 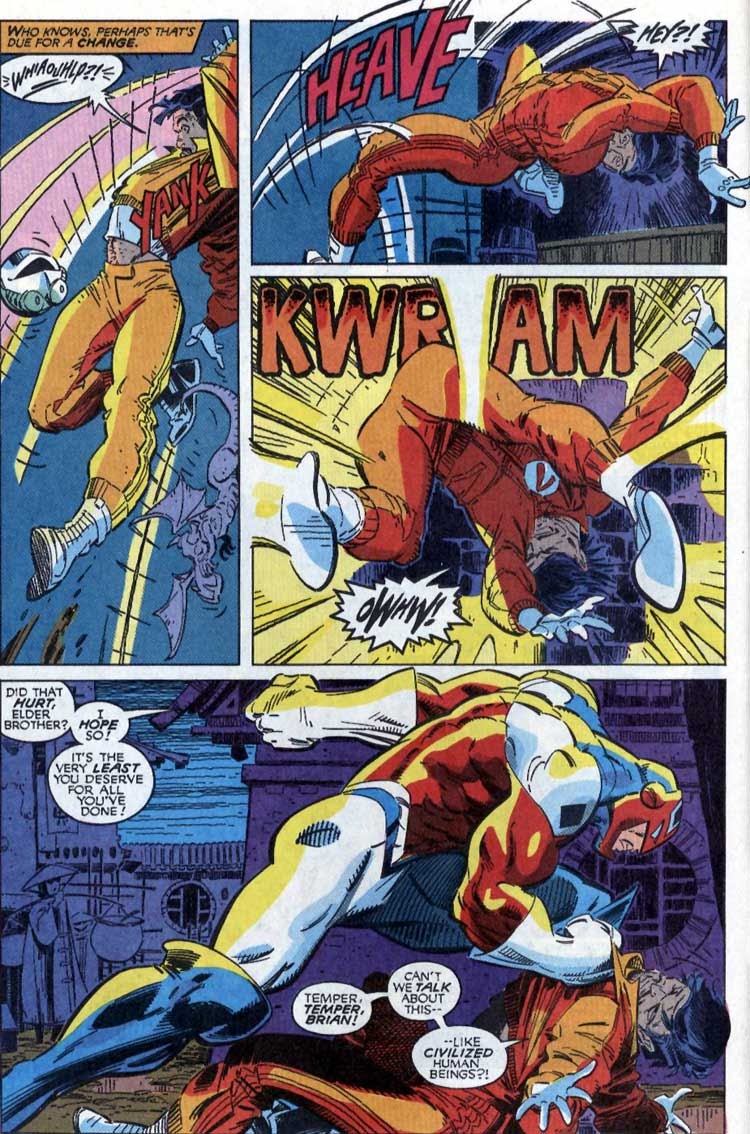 On Jamie as a perfect antagonist for Brian:

“I like the symbolic/physical contrast between Jamie and Brian’s powers. Jamie’s standing back, pulling strings of reality, and Brian’s instinct is to punch him in the face. But that’s not going to work here. Jamie makes Brian have to be more thoughtful about how he’s using his powers–and how he’s using power.” -Anna 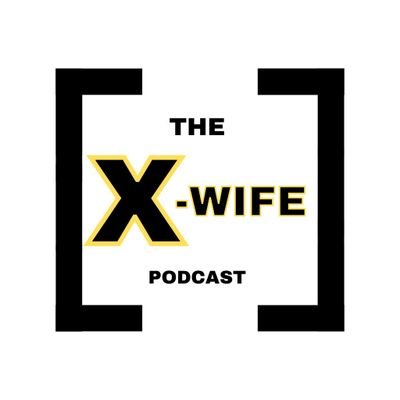 Listen to them share their love and knowledge of X-Men comics old and new on The X-Wife Podcast, on Twitter, on the web, and wherever you get your podcasts!

We dare you not to be utterly charmed by Alicia discovering for the first time the pure joy that is The Sword is Drawn.